To vape is not great 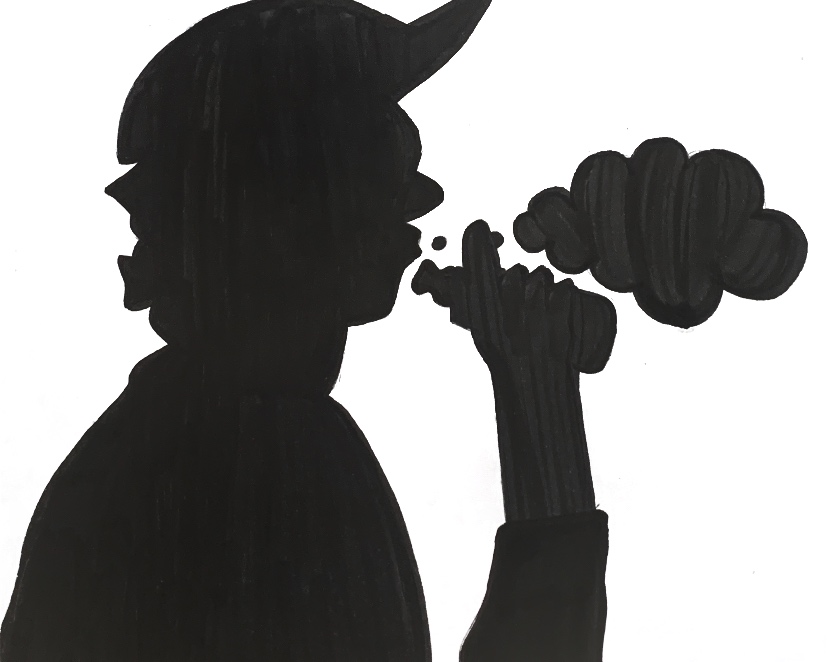 Junior Emma Carpenter proudly shows off the large sticker she keeps on her water bottle: the words “This mom is against vaping” boldly displayed across her Hydro Flask. Carpenter laughs as she shows off her sticker–which she uses ironically–but she sincerely means the message behind it.

“I just don’t understand why people would do it,” explained Carpenter, who believes that there is no benefit to vaping at all.

A recent study conducted by researchers at San Diego State University reveals that a large portion of people who use e-cigarettes only do it because they believe it enhances their social image.

A source granted anonymity by The Page stated, “I don’t really enjoy it. I don’t see the point in it. I mostly did it because of peer pressure.” She explained how she was introduced to vaping by a friend who was addicted, and when offered the Juul responded with, “Hell, yeah.”

She talked about how she didn’t feel guilty about the fact that she did it, but stated, “I wouldn’t encourage other people to do it, because it’s not good for you. But I don’t really care when it comes to myself.”

She continued by saying, “It’s a gateway to worse things, like other drugs, which can lead to alcohol and no-no things.”

According to the FDA program “The Real Cost,” vaping as a teenager can make the user more likely to start using cigarettes. The nicotine in e-cigarettes makes teenagers extremely prone to addiction, which can make them more vulnerable to becoming addicted to other drugs as well.

Vaping has caused a wave of controversy throughout the nation. According to the Washington Post, just last month, Michigan banned flavored e-cigarettes in an effort to prevent the younger generation from the “harmful effects of vaping.”

Though Michigan is the first state to officially ban the use of flavored e-cigarettes, cities such as San Francisco have also prohibited the sale and use of the product. The state Department of Health and Human Services has even declared that young people vaping must be considered a “public health emergency.”

A type of drug called CBD (cannabidiol, an oil made from an extract of cannabis), is very common to use with e-cigarettes in order to achieve the same high that is received from smoking marijuana. The use of CBD has led to many serious cases of injury. A report by NBC News stated that the majority of 329 people who were admitted into the hospital because of vaping-related illnesses were using CBD or another drug that includes components of marijauna.

But another anonymous source admitted, that though he knows the drug can be dangerous to use, he’s unafraid of the health risks. “I think of it like drinking alcohol,” he said. “If you do it every once in a while it’s okay.”

He talked about his first experience with CBD. “It was at my cousin’s house, and he was like, hitting his vape all the time, and he asked if I wanted some, and I said yeah, thinking it was just nicotine. So I hit it, and like 30 seconds later I was completely [bleeped] up.”

He admitted that the first time he tried it, it was a very scary experience. But he said, “I’m used to it now though. I just don’t want to use it too much because I fear getting addicted or something.”

Even though he said that he doesn’t care if other people vape, he stated, “As long as they’re not affecting other people. Like driving while completely [bleeped] up. If you’re going to do it, do it smart.”