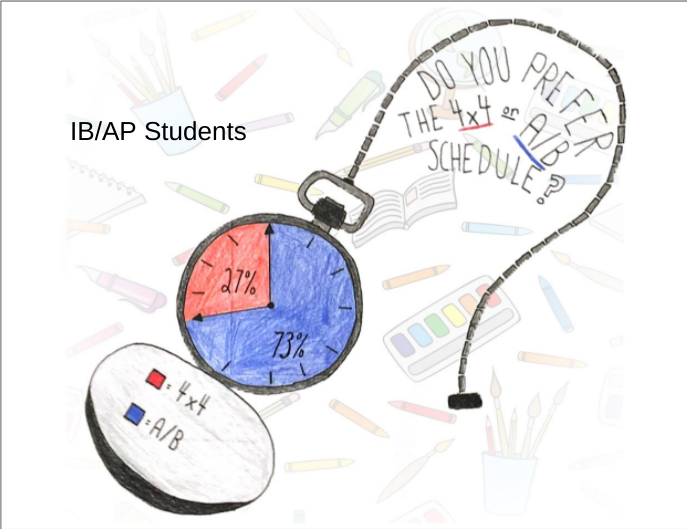 MYP student Katherine Haden has spent the better part of her freshman year learning virtually under the 4×4 model, and she feels strongly that “4×4 blocking is one of many unfortunate events that should stay solely in 2020.”

Core student Lucas Breininger reasons on his support of the 4×4 schedule: “It holds me accountable, provides better structure, and allows me to focus more on individual classes rather than juggling a set of 8 classes,” he says.

Paralleling Breininger’s thoughts, IB student Ian Bridges states that 4×4 “allows me to block and organize my study time better and focus for longer since I don’t have to switch subjects every 30 minutes anymore.”

However, Bridges cites two problems with the present 4×4 system. First, he suggests that “not providing a break after midyear finals will lead a lot of kids to start out on the wrong foot in the second semester.” Second, he expresses apprehension over student ability to “recall and effectively study for” their “respective IB and AP exams at the end of the year.”

One issue that Haden finds with the 4×4 schedule is that “4×4 creates a gap between classes that have a clear progression, such as world languages and math. For example, I take IB Spanish 4 this [term] only, so I’ll have a gap of a semester between Spanish 4 and 5 next year—and if 4×4 continues to be implemented and I happen to be scheduled for Spanish 5 in second semester, it could be an entire year before I take Spanish again! Imagine how much important information students would forget in that time span.”

Although the divide in opinions is evidently vast, students in each program hold similar hopes for their school experience―whether 4×4 or AB is adhered to―namely, minimal stress levels and an ability to succeed in academic endeavors. 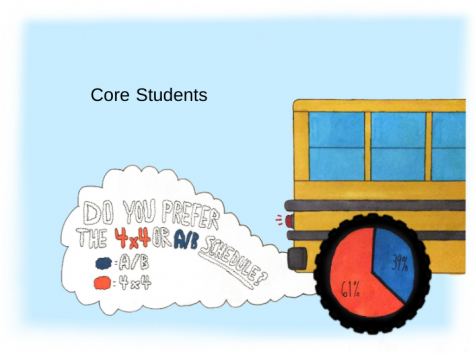 Supporting this, many core students who prefer 4×4 feel that the new schedule is far less overwhelming. One anonymous core student comments, “I love the 4×4 schedule because I can really dedicate my time to these classes rather than all of them at once. I have never had my grades so high!”

Indeed, other core students express that focusing on four classes instead of eight makes school much less stressful―demonstrating the trend in decreased levels of stress for some students under the 4×4 model.

“4×4 is not made for the school schedule that we have,” propounds IB senior Kailey Monroe. “For students with IB or AP classes, exams are on a set date in May. With 4×4, our classes are no longer in line for when these exams are set. Instead, we either have several months between when we learn the material and when we take the exam, or we have a month less to learn all of the material for that class. It really puts us in a difficult predicament.”

One anonymous IB student further emphasizes this fear, commenting: “I am terrified of taking my senior year IB exams based on the content I’m only learning this first term of my junior year. I am concerned about the long-term retention for IB Higher Level courses. I also feel that 4×4 adds a lot of extra work for teachers, but I cannot personally speak to that.”

What is more, Monroe’s peer, IB senior Ghena Kubba, adds: “It just gets boring doing the same thing every day…I genuinely just prefer a balance to switch it up every day and to truly enjoy the curriculum rather than expedite the process and then regurgitate all the information.” IB, AP, and core students all express a similar sentiment.

Commenting on the condition of anonymity, one AP student posits: “In AP Calculus, we have to move so fast to finish the curriculum by the end of the term, and I feel like I’m always three steps behind. I also have found myself doing significantly more make-up work even when I don’t miss class. With 4×4, it’s so much easier to fall behind.”

In addition, while a majority of core students exhibit a preference for the current 4×4 system, a small margin of core students indicate disapproval of the new schedule. One core student anonymously notes that they “feel like [they] don’t receive enough time to retain the information before moving to a new unit, and it is hard to keep up with the homework.”

While still another predicates: “We were used to the AB system,” adding that “everything is too rushed” under the 4×4 format.

Alongside the student distaste for the compact nature of the same-four-classes-each-day model under the 4×4 schedule, students voice specific concerns over their English classes having considerably less time to read and discuss literature, according to the survey.

“In English, we have to read seven books all in one [term],” an anonymous IB student comments. “We have no time to go in depth about each book and we are only speeding through them in order to meet the requirements for IB [or AP].” When normally a class might have a month to review a book, now they may have only one or two weeks.

An array of critics, both within PA and across the district, feel that the 4×4 schedule was, perhaps, not a well-thought-out VBCPS decision; yet, the school board had no precedent for their response under such uncertain circumstances, only frameworks and objectives. The Virginia Beach City Public Schools System has outlined a ‘Compass to 2025 Strategic Framework’ in which six key themes are prioritized for educational efficacy and a positive school environment. However, the limits placed on such objectives by pandemic-induced virtual learning are numerous and such feats are largely reliant on the students’ view of the achievability of the classes laid out. This is, in large part, why the district had selected to implement the 4×4 schedule by the virtual model, in order to minimize the stress placed on students while they learn from home.

One IB student, commenting on the condition of anonymity, recognizes this and admits that “the 4×4 schedule is the best or one of the best ways we could hold our classes in the virtual environment. It is flawed in some ways but better in this situation. But once we transition back to learning in school, the AB schedule would be stronger and [more] preferable.”

Similarly, IB sophomore Owen Crutchfield writes: “I’d rather test a 4×4 schedule in an actual school environment rather than at home on my computer, at least before I make any big decisions about whether or not I like it.”

Although Crutchfield is unsure of his lasting stance, it seems that most IB and AP students are in vehement opposition to the 4×4 schedule. In fact, the survey conducted by The Page found that in addition to the 73 percent of students who reported that they prefer AB, 65 percent of IB and AP students answered that they disapprove of and would even petition against the 4×4 schedule being continued in future years. IB senior Maddy Alarcon echoes this, commenting: “In the best interest in student exams, it makes no sense to continue the 4×4 schedule.”

Not all IB students dislike the 4×4 schedule, though.

“I like that I am only focused on four classes,” reports IB freshmen Nehir Dagtoros. “I feel like I learn more. Having many classes at once forces my brain to constantly have to switch modes, which can be overwhelming. I just think 4×4 is more effective.”

One benefit of the 4×4 schedule is that it enables some students to graduate early. This is the case for one anonymous core student, who notes: “I wouldn’t have been able to [graduate early] with the normal schedule. I am taking the grade 11 courses now and the grade 12 courses next semester so it works out great. I get to get out early and start my life, actually.”

A variety of concerns accounted for, the effect of the 4×4 schedule on the performing arts stands separate from the rest. One IB commentator states: “The 4×4 schedule also wreaks havoc on the performing arts, as it becomes impossible to coordinate all their students between the two semesters or enact any sort of collaboration between classes of different skill levels.”

In all, opinions of students within the PA community and across the district are highly variable and district-level decisions are ultimately derived from majority opinions, represented by elected school board officials, rather than upon the intricacies of opinion within one school or another. In line with the opinions of a large part of the IB and AP student sector and a minority piece of the core student sector at PA, the school board has released a statement saying that the AB schedule will resume in post-pandemic years to come; yet, due to the ever-shifting demographics in the district region, and the cohesive variability in the constituent base of school board elected officials, no decision is guaranteed as a permanent stance.