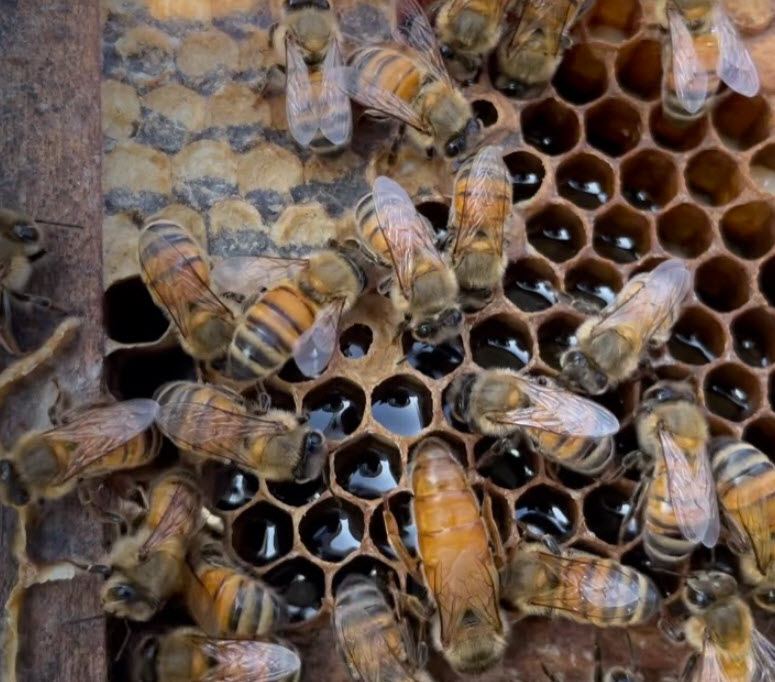 After a struggling two years with a Varroa mite infestation and a swarming hive, the PA bees are thriving and working hard to produce their sweet honey. Instructional Technology Specialist Stephen Delaney as well as the Garden and Bee Cub founded by Katie Liakos, Monica Lang, and Sidney Kinser, overlook the hive.

Delaney explained that he first got involved with the bee club when they asked him to build the beehive boxes and frames. During that time, before the pandemic, a group of students who were very passionate about environmental awareness ran the club. “I really wanted to support their efforts, so I became involved in the club. I’m so glad I did! It’s very rewarding!” stated Delaney, who is a skilled amateur carpenter.

Delaney learned his beekeeping skills from Sharon Boudreau, a retired PA teacher and beekeeper who is referred to as “queen bee.” She has helped throughout the process of building the hive, maintaining, and taking care of the bees.

Even though the hive has a population of over 20,000 bees, it is still considered a young hive. The honey that is produced will be kept in the hive for them to consume during the winter season when they are no longer foraging for pollen or making honey. During the cold winter months, bees will feed off the honey they have produced and cluster together for warmth. Delaney explained that he will add a sticky candy-like substance that is layered at the top of the hive to insulate and keep the hive warm.

The hive is thriving now, but it has overcome many challenges. “There are a number of things that can go wrong with a hive, and we have had some setbacks over the last couple of years,” stated Delaney.

The first hive was invaded by Varroa mites, a problem that is very common in beehives throughout the country. The parasites attach to the bees and weaken their systems until eventually killing them. “Although we were treating the hive for these mites, they persisted and eventually killed off the hive, which was very sad,” according to Delaney.

After the mites killed off the first hive, Delaney purchased a new queen bee to repopulate the hive again. The hive swarmed which means that the queen fled and the rest of the bees followed. The hive was left abandoned. “We’re learning ways to prevent swarming, and how to check the hive to make sure the conditions are just right so that the queen does not want to leave,” stated Delaney. If the hive becomes overcrowded and is not expanded or divided into two hives it is more likely to swarm.

In one season, a beehive will produce over 60 pounds of honey, filling one or more boxes of frames. The goal is to keep adding frames so the bees can produce enough honey to harvest while still having enough to survive the winter. “Right now, although the bees are continuing to bring in pollen from flowers to make honey, we are adding additional food for them in the form of a sugar-water mixture to supplement the pollen,” stated Delaney, who even drives out to check on the hive at night.

“Having a hive survive the winter months can be a challenge. Hopefully, we will harvest honey next year,” explained Delaney. He noted that the club is thinking of working with the cafeteria to cook a special recipe with the collected honey and potentially distributing small containers for students and teachers to try. “Local honey is very healthy,” said Delaney.

The hive is growing quickly so it will soon be able to split into two hives and the second hive will have its own queen. “Usually, the split hive will make its own new queen, but if they don’t, we can actually purchase a queen to put in the hive,” wrote Delaney.

Delaney expects the frames to be filled by the next year and will harvest the sweet honey to share with students and teachers. “A beehive is a very fascinating habitat, and bees are a vital part of our ecosystem. The worldwide population of bees is declining, so preserving them is very important and rewarding work,” stated Delaney.

The Bee Club is currently looking for students who are interested in discovering more about the bee habitat and learning beekeeping skills. If you’re interested come see Delaney in room 222.