The Fabulous Marching Cavaliers march on 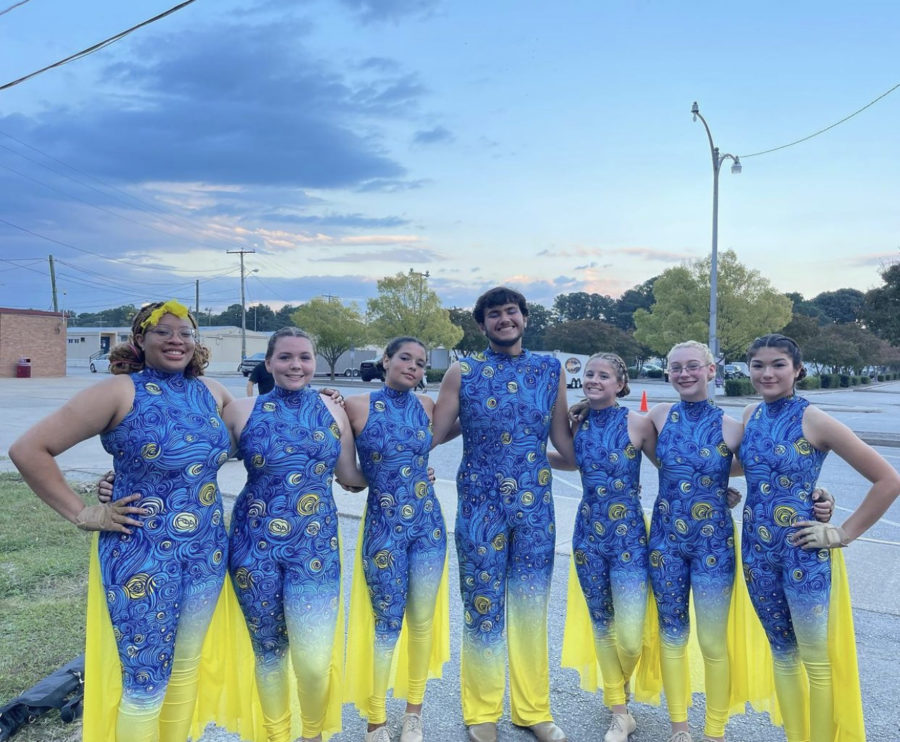 FMC Color Guard at the VMBC Tidewater Regional on Oct. 16. Courtesy of @fmcguard.

The Fabulous Marching Cavaliers (FMC) put on a show on Oct. 16 for the VMBC Tidewater Regional with the theme of The Starry Night. The wind and rain did not faze the band as it won First Place for Group Two. Along with that, they scored Best Music, Best Visual, Best Effect, Best Color Guard, and Best Percussion. This competition hosted by PA included a total of 21 bands, some coming from around Virginia and others who traveled all the way down from North Carolina.

Their performance that entailed visuals and music based on The Starry Night incorporated stars scattered throughout the field and uniforms that tied into the theme. This includes the color guard, with their vibrant flags waving throughout their routine.

Unfortunately, not all bands were able to compete due to the rain that began to pour near the end of the show.

This is not the only feat the FMC has accomplished this year. On Sept. 25, their first competition since 2019, ended in victory at the Southeastern Virginia Music Games held by Hickory High School, in which the band won First Place in their class and awards for (once again) Best Music, Best Visual, Best General Effect, Best Color Guard, Best Percussion, and Best Drum Major. Out of the 14 competing bands, they won Grand Champion overall (top score of all the bands regardless of size).

The FMC has a past of being nothing short of successful, being the upholders of two times defending State Champions.

According to Band Director John Boyd, COVID put a strain on several bands throughout the state; PA was no exception. “We marched 82 kids in 2019. We’re marching 50 this year,” said John Boyd.

John Boyd reports the band having difficulty for the past two years due to the fact that they haven’t been able to recruit any freshmen: “It’s very difficult to get the word out.” John Boyd feels that it is hard to motivate kids to get involved with an activity that is outdoors, athletic, and hardworking when the kids have been put in front of a screen for so long.

“But if they are encouraged to do it, then the kids come to find out that it’s so much more than anything they’ve experienced before,” said John Boyd. “The kids in the band have a tremendous esprit de corps. They are all engaged and they’re all in. You don’t do that if it’s not fun.”

When it comes to preparations for an upcoming event, John Boyd states that the band takes rehearsals seriously and the members are very on task, each pinning towards separate things.

The parents of the members also find enjoyment by participating within the band, as they have been helping with activities such as creating props for their shows. “It’s a full team effort,” said John Boyd.

The Field Captain of the FMC, Gabriel Boyd, has been in marching band for four years and is now in his senior year playing the mellophone.

“In marching band, that’s when you find the most dedicated musicians. To be around people who are dedicated and not being lackadaisical is a really nice environment to be in when everyone is working as hard as you are,” said Gabriel Boyd.

In regards to rehearsals, Gabriel Boyd explains it to be somewhat intense: “There’s a lot of work that goes into it.” During preparations for shows, the kids are expected to perfect a chunk of the show with the given time, and then be ready to go on and perform.

One of Gabriel Boyd’s favorite aspects of the band is “getting good.”

In the “Rules of the Fabulous Marching Cavaliers,” it goes on to list 17 guidelines for the band. Gabriel Boyd especially refers back to the first three rules, which are “don’t suck, don’t suck, and see rules one and two.”

“I like the culture and the legacy of the FMC. We were founded in and given our name in 1969 so we’ve been a band for longer than most high schools in Virginia Beach,” said Gabriel Boyd.

Senior Vivianne Wolverton, the Drum Major for the FMC, recalls one of her favorite parts of being in band: “Getting to hang out with the people is so cool and watching them grow into completely different people over the course of just a few months. They just become your family and that is incredibly amazing.”

Wolverton has been in band for seven years, and marching band for four. She has been known for winning the award of Best Drum Major for several competitions this year. Prior to being the Drum Major, she played the oboe, wind ensemble, and marched with the piccolo for three years.

“If anyone wants to come join band, then I 100 percent recommend it,” said Wolverton.

Senior Abigail Ferguson, who marches with the tenor saxophone, also recommends band to students who are interested: “I would like to destigmatize the thought that the FMC is too elite, when it is really open to everyone.”

This year is Ferguson’s first year marching for the FMC, after attending band camp over the summer. “I joined with no saxophone experience, no marching experience, and they welcomed me with open arms and taught me everything,” said Ferguson.

Similar to Wolverton, Ferguson’s favorite part of the band is “the people. The people in the band really make it the FMC. I have so much fun with every practice. We are all friends, all of the sections are really close, and it’s all because we spend so much time together.”

Ferguson comments,“I’m currently having the best time ever. I’ve made friends that I know will last for lifetimes. If you’re looking for a community of people, they will welcome anyone.”