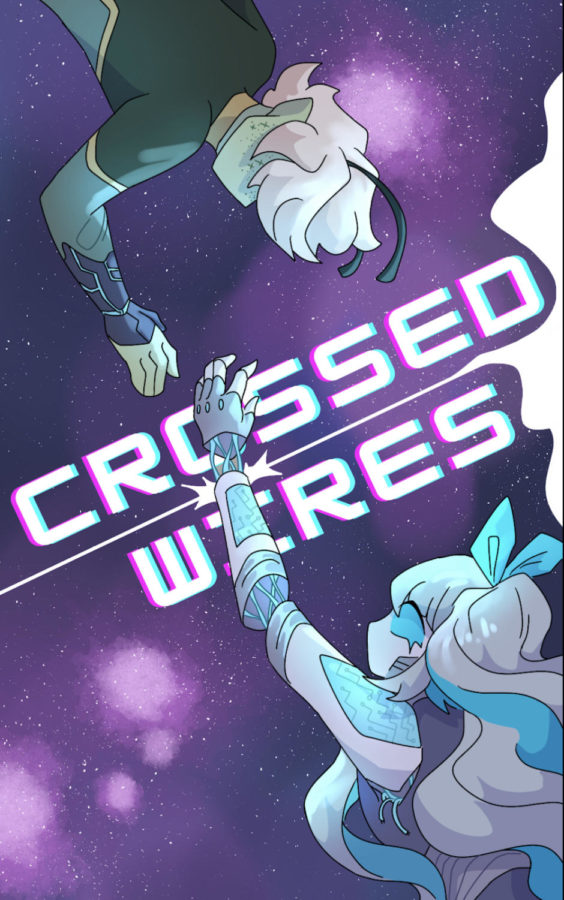 Prove I am vincible

Rip my shoulders from their sockets

Dissect the tangles in my head

And when metal bones break,

When I am nothing at last,

Bring me back again.

“Morning, sleepyhead.” My client is kicking the side of the spaceship, which has been non-operational since we crashed it on an unknown planet 16 hours ago. Technically I cannot be considered a “sleepyhead,” as I do not sleep like an organic would– however, saying this aloud would only aggravate his frustration at being stranded, so I decide to overlook the inaccuracy.

“I do not think applying force to the exterior will fix anything, sir.”

He stops and walks over to me, shoving his hands into the pockets of his jumpsuit. “Yeah, well, you have any better ideas? I tried attaching the wires in the control panel to different terminals, but all that did was give me a shock.”

“I was not programmed to be a mechanic– and please exercise more caution with electricity. My duty is to protect you from assassins, not your own stupidity.”

He turns his face up to the blood-orange sky and drapes a hand over his eyes. “Hiring you was a mistake.”

Clouds have long covered the sun when my client gives up fiddling with the control panel. He slides onto the ground with a sigh and takes a ration bar from his pocket, then unwraps it and holds it out to me. How illogical. “…I do not eat, sir.”

He shrugs and takes a bite. “You don’t have to call me sir, you know– my name is Polaris. Oh, hey, what’s your name? I guess I should’ve asked sooner, sorry; I’ve been all over the place lately.”

In fairness, we only met yesterday, and we spent the greater part of it fleeing from pirates (and eventually crashing the spaceship). I realize that he is waiting for me to reply. “I don’t have a name. Although my model-serial number is AE-5-06–”

“Um, I’m not going to call you an arbitrary string of letters and numbers every time I need to get your attention.”

“Is that not what a name is? An arbitrary string of letters?”

“Well…” He gazes into the trees, becoming lost in thought as organics seem so apt to do. There is a pleasantly damp smell in the air as blankets of fog catch in the leaves, and the carpet of pine needles on the ground is slightly spongy. “Kind of, but a name has a meaning attached to it. And it’s way easier to pronounce than AE-whatever.”

“Then I suppose you may name me…for the sake of convenience.”

The notification manifests as a translucent crimson box in my peripheral vision, throwing the forest into a rusty blur until I shake my head to clear it. For all the technical advantages I have over organics, I sometimes envy their intuition. Their capacity to feel.

What a tumultuous existence they must lead.

My head snaps to the side as I sense an organic hiding just behind a tree. It raises something– a [BLASTER]– Polaris is in front of me, it has a clear shot, [85% CHANCE OF–

Polaris is behind me now.

Polaris is shouting something. Alice. Over and over. Alice, Alice. My…name? He gave me a name.

I go to fire my own blaster at the own figure, but my arm does not move. No– my arm is no longer there.

My left arm can shoot just as accurately. The figure crumples to the ground.

I walk up to it and crouch down, watching its pulse fall to zero. The attacker’s face is caved in and unrecognizable, as my shot struck directly in the forehead. Impractical for the purpose of identification, and yet a different part of me fills with a peculiar feeling–a twisted satisfaction.

I begin to search the body, but someone grabs my intact arm and drags me upright. I yank my arm away and nearly put my assailant into a chokehold before I recognize him as Polaris. “What is the matter? The body may hold something useful.”

“I don’t care about that,” he chokes out. His voice is strained, and his hands are shaking as he holds my detached right arm, sunset-colored sparks jumping off its mangled wires. He must have seen it on the ground. I take it from him as gently as I can and he hides his hands behind his back. “What did you do that for?! You could’ve gotten killed, Alice!”

I take a step back. The world seems sharper. “I do not understand–not only did you hire me for the express purpose of protecting you from bodily harm, I am not alive; therefore by definition, I cannot be killed.”

“Don’t say that,” Polaris hisses miserably. I want to take his face in my hands–that is, my singular hand. “You’re still…I mean, you…if you died because of me, how could I…”

“There are a total of 1,803,956 other AE-5 androids in circulation in this galaxy alone, Polaris. I am expendable–you, as an organic, are not; not only in terms of death, but in terms of injury. We can simply reattach my arm; it is equipped with a self-repairing mechanism. If it had been your arm that was injured, I fear it would have been far more complicated. Therefore, logically…” My voice drops off as Polaris holds up his own right arm for me to see…and tears his skin away.

Wires snake down the exposed metal of his arm.

My visual processors must be malfunctioning.

I blink, yet the metal remains.

It must be a cognitive error. I have recorded his vital signs countless times; he has a heat signature– how could–

“I had an accident when I was a teenager. Had to get most of my body replaced with cybernetic parts. So if you’re ‘expendable,’ then so am I.” He meets my eyes now. I want to strangle him and tend to his arm at the same time.

“And you decided to tell me this by ripping your skin off?”

“I wanted to show solidarity!”

“Polaris, if this is your idea of solidarity, I don’t want it!” I am mere inches away from him, my hand gripping his collar and pulling him close, close enough to see the freckles sprinkled across his face. They remind me of stars. What kind of observation is that?

An uncomfortable heat pricks the back of my neck. I release him and back away, resuming my search of the body. Polaris leans over my shoulder but wrenches his head away when he catches sight of the corpse’s ruined features. I should have warned him.

The body’s vest yields a small holographic map, which reveals that the closest city is 40 miles away. “That’s not so bad,” Polaris remarks when he sees it. “We could reach it in a few days, maybe bring someone back with us to fix the ship…” He trails off, staring at the body more intently.

“Is something wrong?” I am standing close to him again. I try not to focus on his freckles this time. It is quite difficult.

“I just…wonder who the attacker was. I’ve got so many enemies as an ex-prince that it could really be anyone, but it would be best to know for sure…Of course, that’s impossible now that you’ve kind of destroyed their face.” Polaris offers me a tentative grin. I do not know how to respond. I was not programmed to smile.

I decide to get the reattachment over with instead and shove my right arm back into its socket, holding it against the hissing wires until I hear a click. When I look up at him again, he is staring at it, his smile gone. I miss it. “Wow. Um. How did you reattach your arm like it was nothing?”

“The same way you tore your skin off like it was nothing!”

He furrows his brow, genuinely surprised. “It really bothers you that much?”

“Yes!” I raise my voice. I did not intend to. “It just…disconcerts me. The wires. The sparks. But most of all, that you would injure yourself to help me.”

“That is false. The levels of oxygenated hemoglobin in your prefrontal cortex are consistent with that of pain processing activity–”

He groans and lets his head fall onto my shoulder. “You know what? I’m too tired to ‘process’ your robot-talk…Wait a minute, did you say it disconcerts you? Isn’t that, y’know, a feeling? An organic feeling?”

“That is what I said, yes. I do not wish any harm to befall you, no matter the circumstances. I am your protector, after all.”

“Well, I don’t wish any harm to befall you either. Tell you what, if you stop taking bullets for me, I’ll stop ripping my skin off for you. Deal?”

I rest my newly attached hand on the top of his head. His hair is soft to the touch. “…Deal.”

He smiles against my shoulder. “And you say you aren’t alive…”