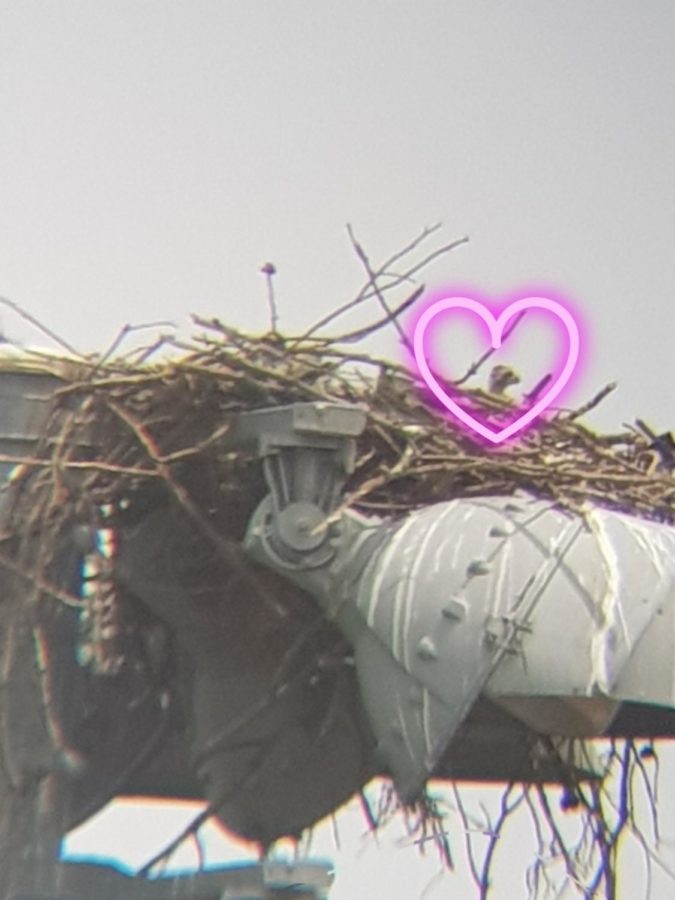 Yesterday science teacher Janine Highsmith spotted a broken eggshell on the ground underneath PA’s osprey nest. After further observation, Highsmith discovered a newly hatched osprey chick peaking over the nest. Click on the link below to check out the chick.

A pair of osprey, also known as sea hawks, have evidently mated (they are monogamous and mate for life), and have built a nest on a light pole by the tennis courts. The male can be seen bringing food to the female.

Osprey usually lay between one and three eggs, which do not all hatch at the same time, but might hatch several days apart. The female remains largely hidden in the nest with her egg or eggs.

Osprey are fish eaters, and build their nests near bodies of water that can supply them with food. Their wing span can reach six feet, and they are very accurate divers, usually getting a fish once in every four attempts.

Science teacher Janine Highsmith has been avidly watching the osprey since the nest building began, bringing to school a telescope to see better from her upstairs 326 classroom.

She explained that building the nest was an ordeal, as for several days twigs and small branches fell to the ground, creating a circle around the pole. Since then the results of the difficulty have been swept onto the tennis courts (see picture). But eventually the nest was built, and the female laid her egg(s).

The Page will keep readers posted on future chick hatching.