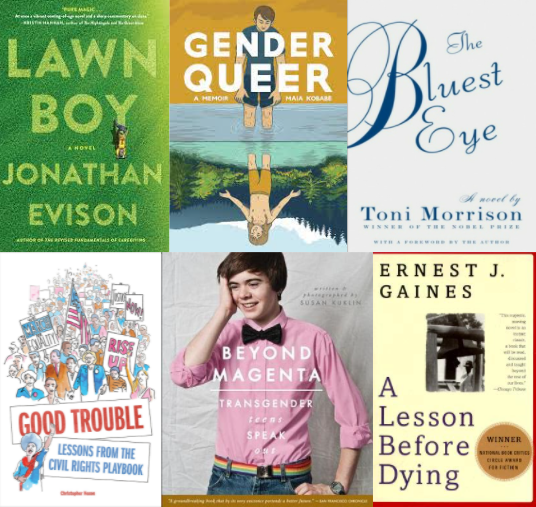 Remember the phrase “don’t judge a book by its cover?”

Well, don’t judge it by one scene either.

About two weeks ago Victoria Manney and Laura Hughes of the VBCPS School Board requested review of four books for “pornographic material” and have succeeded in receiving agreement for the removal of Gender Queer: A Memoir. The other three books, whose fates will be discussed at the School Board meeting on Oct. 26, are Lawn Boy, The Bluest Eye, and A Lesson Before Dying. Two other works, Beyond Magenta: Transgender Teens Speak Out and Good Trouble: Lessons from the Civil Rights Playbook, are also being challenged.

“I think there are certainly some things in the novel that are maybe not entirely appropriate. However, I do think that teenagers are a lot more mature and resilient than people give them credit for, and they can handle it,” said a PA teacher who has been granted anonymity by The Page. In reference to A Lesson Before Dying, their comment reflects the general opinion of English teachers towards the recent book banning controversy.

In response to Manning’s proposition, several teachers have expressed general disagreement, especially those familiar with using the books in question as a part of their curriculum.

“Members of the school board have issued challenges against multiple books at the same time, which creates an issue, because by allowing multiple challenges to happen simultaneously, you are speeding up the process by which you can remove books. Also, you are clustering them into similar categories…then it becomes a lot harder to specifically challenge individual content within those texts. If I say that two books are together and should be challenged together, and one book is worth challenging and the other is not, I could theoretically pull both books because I have lumped them together, and everybody accepts that, ” says a second anonymous teacher.

According to the Virginian-Pilot, “Some parents may be shocked when they find out their child is learning about certain topics. Several parents and community members referenced the books in the public comments, objecting to these books being available on shelves in Virginia Beach libraries. A few read passages from challenged texts and showed printouts of scenes depicting sexual acts from Kobabe’s Gender Queer.”

Regarding the text, the same teacher “understand[s] the case for the book Gender Queer. There are some panels there that a parent might be uncomfortable with their child seeing. I think if we are realistic about it though, the panels are probably not anything that is drastically different than stuff that the child has seen elsewhere, or heard about elsewhere.”

They continued, “In the context of the book, it’s about finding your own identity and understanding your place in the world. The panels that have been picked by the school board members are decontextualized, and if you see those panels out of context, I think it looks worse than it is.”

“I always think that the overall meaning of the book is so much more important than an individual scene,” says English teacher Kerry Kisa. “Anything can be taken out of context…you can take parts of The Constitution out of context. Do I call it then a bigoted document? No, I understand the context.”

On a similar note, the first anonymous teacher explained the importance of evaluating A Lesson For Dying as a whole, and not just judging its one instance of graphic content at face value. They noted that students often do not even notice or register the singular passage that contains sexual content, as it is not the point of the novel.

Instead, A Lesson Before Dying “exposes students to history that they were maybe not aware of. It reminds them that even though it is history, it is not ancient history, it’s recent history. It gives them an insight into the lives of other people, how other people that are not like them live. It reminds them that we’re all human regardless of the things that we’ve done, or where we grew up, or obviously, the color of our skin.”

“The book is about empathy and understanding and justice and humanity. To throw everything away for that one scene would be doing everyone a disservice.”

Kisa reiterates this opinion, stating that A Lesson Before Dying “is a beautiful story of finding human dignity even in the face of death. It is such a beautiful novel that most kids remember as their favorite.”

Also familiar with The Bluest Eye, Kisa recognizes its sexually explicit content and argues that it should be reserved for seniors. Still, she also believes “The value of [The Bluest Eye] is it gives a perspective of growing up in a world that describes what is beautiful and you’re not a part of it, and what that does to the psyche of a young girl, which then makes her susceptible to what happens to her.”

While she no longer teaches The Bluest Eye, Kisa still teaches Song of Solomon, also by Toni Morrison, which also includes some uncomfortable scenes. Despite this, Kisa believes that “high school seniors especially should be exposed to Toni Morrison. She was the first African American to win the Nobel Prize for literature. She needs to be taught.”

In respect to the main characters of all four books being minorities Kisa says, “It’s mighty coincidental, isn’t it? You can’t help but see a trend there…When we look around our schools, and we look around the young people, you guys are so much more advanced than my generation, in terms of your acceptance and inclusion. If our literature doesn’t reflect that, then I feel like that adds to the disconnect between education and people your age.”

The second anonymous teacher shares Kisa’s opinion, stating, “[The authors of the books being questioned] are not the only people who are pushing the boundaries of what might be considered appropriate. It would be a lot easier to accept the argument that this is about defending a child from offensive content if the people who were targeted were not just black and gay people. To me, it seems like a pretty easy situation to figure out.”

To ban or not to ban: There really is no question

It’s 2021 and we are still fighting for our right to choose what we read. Of the six books brought up for School Board review, A Lesson Before Dying is the only one I know currently being used in the classroom; it is in the curriculum for MYP English 10. Each of these books has minority main characters with The Bluest Eye and A Lesson Before Dying focusing on the black experience, Gender Queer having a nonbinary and asexual main character, Beyond Magenta: Transgender Teens Speak Out including interviews from six transgender or gender-neutral young adults, Good Trouble: Lessons from the Civil Rights Playbook discussing events from the Civil Rights Movement, and Lawn Boy’s main character being Hispanic and familiar with racial and socioeconomic struggles. Of these six books, I have read two: Gender Queer and A Lesson Before Dying. So while I will make broad comments about all six books, I am not the most reliable source for the other four.

My question for the school board is: Why stop here? If they are going after five of these books for containing sex why not go after 1984, Their Eyes Were Watching God, The Bride Price, and Song of Solomon too? These books all include instances of sex, sexual assault, or rape. Three of the four also follow minority characters if that is the real issue here. What arbitrary guidelines consider the first books to be “graphic” but not these? Book restriction, something I am a strong believer against, is a very slippery slope, and if this is the path the school board wishes to take, I want to know how far they will go.

When considering the content of these books, I am not going to pretend they are the most comfortable scenes to read. Of course, no one enjoys reading about a father raping his child, as in the excerpt of The Bluest Eyes I read, but that does not make the work less valuable. Most of the time being uncomfortable means that we are learning and growing. Rape still exists in the world and burying our heads in the sand will not make that go away. We need to stop pretending that high schoolers live under a rock. By the time they are seniors, most will have read about or watched media including sexual activity. Some will even be sexually active themselves.

In a way that makes reading these types of books even more valuable, as they display different experiences and can be valuable teaching tools. In any case, the sexual content of these novels should not be the main takeaway from reading these books. People want to see themselves in the books they read and connect to the characters and the situations they go through. Minority characters in literature are extremely important for the health and well-being of young people because they demonstrate authentic experiences and provide a sense of community. There is value for non-minority readers as well, because these books force their readers to be open-minded to the lives of people around them.

However, I will say that I can understand some parental concerns with these books (not including A Lesson Before Dying). There is a reason their recommended audience is 12th graders. When researching Lawn Boy, the main contested passage contains “graphic” language to describe sexual activity between two male minors. I can see why some parents would not want their children reading that. At the same time, since when has parental supervision become the job of the school system? It should not be.

The bottom line is that restricting access to these books is not going to keep students from getting their hands on them. The books are still available through the public library system and some can even be found online. After learning about the controversy, some students, such as myself, will even go out of their way to read these books purely out of spite, and curiosity.

I understand not every book ever written is appropriate for a high-school audience, but these books passed the initial vetting process that all books in VBCPS schools must go through. What has changed since then?  And when has the banning of books ever made a positive impact? Sure, parents have a right to monitor what their children read, but they should not try to restrict the access of other students to that same literature. Moreover, this ban was not proposed by an impartial parent. It was proposed by the member of the School Board, who openly admitted to not having read these books, blindly following the actions of Fairfax’s School Board. At what point are people like Manning going to realize that their own personal opinions should not be forced on to other people? When will adults respect our maturity and right to choose the information we consume? If action is taken, maybe in some small way it can start now. With us.