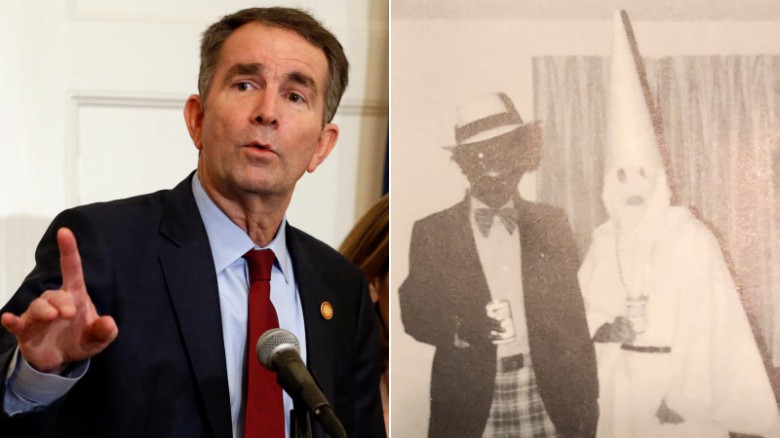 The controversy of Ralph Northam

As the controversy surrounding Virginia Governor Ralph Northam continues, The Page investigates both sides of the issue.

In defense of our governor

About two years ago, my dad met a tall, well-spoken man at a party in Norfolk. A military doctor, he was described to me as the nicest man one could ever meet and had already led an impressive career of fearlessly helping others. This was former Lieutenant Governor Ralph Northam, a name with which you are now, surely, very familiar.

At the celebratory gubernatorial inauguration in 2017, Northam gave a speech that still sticks with me today, urging each of us to follow our ingrained “moral compass.”

“Virginia and this country need that more than ever these days,” he said, according to the Richmond Times-Dispatch. “It can be hard to find our way in a time when there’s so much shouting, when nasty, shallow tweets take the place of honest debate, and when scoring political points gets in the way of dealing with real problems.”

Ralph Northam is a great fellow. After talking to people who know him personally, it seems obligatory to give him some more sympathy for his past mistakes. The vast majority of Virginians, however, cannot make a personally informed judgment of his character, and thus Ralph has become a victim of democratic cowardice.

On Feb. 1 a photograph from his 1984 Eastern Virginia Medical School (EVMS) yearbook surfaced online, a page dedicated to his name. The page features four images: one being his school portrait, another featuring him kneeling in a cowboy hat, another showing him posing in front of a convertible, and on the far right, a picture of a man in Ku Klux Klan garb next to a man wearing blackface. Oh, boy.

This dropped the bomb on what had already been a rough week for Northam, following his support of a bill permitting late-term abortions that were labeled “infanticide” by numerous right-wing officials and influencers, including the ultra-conservative Big League Politics, the ones who initially investigated and republished the image from the yearbook.

Northam initially admitted to being in the photo the day it had surfaced, but denied it on the next day after failing to remember or to recognize himself. Doctor Rob Marsh, Northam’s former roommate at the school and the co-chairman of the committee that sponsored the party in question, was “truly stunned” when the picture went viral.

“I was at the Halloween party the governor went to and I know what he was wearing exactly,” he said in an interview with NBC. “Ralph comes out, and I remember he was dressed in a three-piece and he had a briefcase.” He was supposed to look like a lawyer, not Jim Crow or a Grand Wizard.

“He’s always been very welcoming and kind,” said sophomore Jacob Ellis, who worked for Northam in 2017 as a page in the General Assembly and again on his gubernatorial campaign.

“I never thought I would get a call one day from my best friend saying ‘Turn on CNN, it’s Ralph.’”

I saw another EVMS picture from around the same time on Twitter, showing young Northam next to three other friends, and on the far right of the picture is someone wearing identical pants and the same angled face and height as the man wearing blackface. If they are the same person, which seems to be the case, then Northam is taller than both subjects in the yearbook photo.

Regardless of whether Northam is pictured in that racist photograph, this is yet another case of the internet reacting far too quickly and far too spitefully in response to politically charged media. The situation with the Covington Catholic School students (their actions were completely understandable; if you have not yet, read my last editorial) taught us the dangers of acting impulsively judgments and how prejudice can be planted by a 10-second video, let alone a single frame from a 1984 college party. Blackface and Klan garments are surely on an entirely different level from ignorant high school boys mocking a drumbeat, but nonetheless, we cannot properly evaluate any motives without knowing the entirety of the situation. We only see one perspective, so the easiest judgment we can make looks only at the dispositional factors.

Within an hour of the photograph resurfacing many had already gone as far as calling for Northam’s resignation. At this point, most Democrats politicians, even those who share close personal relationships with Northam, have called him out. Despite knowing this was unlike him, they acted out of their own self-interest for keeping and polarizing their supporters. There truly are no friends in politics.

After denying that he appeared in the yearbook picture, Northam did admit to using shoe polish to “darken his face” as an impersonation for Michael Jackson in a dance contest. Although very ill-received in the media. Still, not the right thing to do, but it’s easy to see that the intentions were not to mock. Indeed, he really knows how to moonwalk.

With Attorney General Mark Herring now also admitting to wearing blackface in college, and Lieutenant Governor Justin Fairfax facing sexual abuse allegations, this is definitely not a fun time to be a Virginian.

One reason Virginia Democrats have been so quick to call out Northam is because many Republicans have been making racist statements, doing their best to deny minorities to vote, and having long histories of racist policies, and Democrats have been quick to judge against them. If they did not go off on Northam, they would be accused of following a double standard, and they would rather throw Northam to the wolves. He is, as FiveThirtyEight Editor-in-Chief Nate Silver stated on Twitter, “not a particularly important or beloved figure in the [Democratic] party,” and relatively new to politics. Calling out Northam was the safe and easy option in this scenario, at least politically.

Wearing blackface is, and has always been, inherently wrong and offensive. But despite being just 35 years ago, the 80’s were a completely different time. The American eugenics movement was still fully underway, where those born with disabilities were forcefully sterilized in an attempt to form a master race. The Red Scare had infiltrated Hollywood, publicly humiliating and ruining the lives of far too many innocent actors and actresses who were suspected of communist ideology or Russian approval. These events, although appalling, were publicly acknowledged and publicly accepted. Closer to the passage of the Civil Rights Act than to the surfacing of the yearbook photo, African-Americans still were not given any prominent voice in American society and the nation was still fully and undoubtedly run by the white male. It was much easier to dress up for Halloween as a black man next to a KKK member without thinking too hard about the repercussions or the message viewers could receive. It was easier to find humor in its irony. Of course it was wrong, but we simply cannot use our current political and moral etiquette standards to draw a proper understanding of the actions from a different generation. The human race progresses, even just in 35 years. Individuals can, too.

When Virginia gets the spotlight from national media, it’s never a good sign. Our state gained attention after the Virginia Tech shooting that killed 33 people and in 2017 when Charlottesville, Virginia was home to a white supremacy protest that ended with one woman killed by a car.

Governor Ralph Northam is now another blemish on Virginian history as racist photos of his medical school yearbook from 1984 leaked. The page, which is entitled ¨Ralph Shearer Northam¨  features his headshot to the left. To the right of that picture is two people who cannot be identified. One of these people is in blackface and the other is in Ku Klux Klan robes.

Governor Northam originally released an apology for the photo, but now claims he ¨believes¨ he is neither person and refuses to resign. Famous politicians from all beliefs and across party lines currently agree Ralph Northam should resign. Virginia’s two senators, who are also in the Democratic Party, Mark Warner and Tim Kaine have called for his resignation along with Attorney General Mark Herring and Virginia’s former governor (who happens to be the first African American governor of Virginia) Doug Wilder.

Ironically, Attorney General Mark Herring recently admitted to wearing blackface in 1980 to look like a rapper when he attended the University of Virginia. In light of the scandal, Herring has announced he is unclear on whether or not he will continue to serve, pending the results of the scandal.

It doesn’t take a genius to see that when politicians who can’t even agree on keeping the government open and functioning agree on a resignation, there should be no question.

There are, in fact, many aspects of this story that I believe completely condemn Northam and make his resignation necessary for the commonwealth. Firstly, the picture is from 1984. There is no excuse of ¨back in my day this was socially acceptable,¨ many of our parents are Northam´s age, and 1984 was much more modernized than the fifties. Secondly, this is not a high school yearbook picture, it’s from medical school. In 1984, Ralph Northam was around the age of 25. He was not a child, it was not a ¨dumb mistake.¨ he was a functioning adult with a functioning brain who made a conscious decision, which brings me to my next point.

Originally, Governor Northam apologized for the photo. Why would he apologize for the photo if it wasn’t him? And how do you ¨mistakenly¨ think that is yourself in a photograph? Honestly, this begs the question of whether or not this incident even stood out to Northam as something wrong he did if he cannot even place if it was, in fact, him. Now his current denial of the photograph is suspicious because of his original apology, not to mention that these two people cannot be identified, so his claim cannot be proven.

Other racist photographs were also found in other pages of the yearbook, such as a white man on page 34 holding a coffee mug that reads as follows: ¨We can’t get fired! Slaves have to be sold.” There are also other pictures of people in blackface, but I could truly go on for ages on the number of racist pictures that just happen to appear in Governor Ralph Northam´s yearbook.

In the midst of calls for resignation, eyes are slowing turning towards the current Lieutenant Governor, Justin Fairfax, who happens to be African American.

Fairfax has so far expressed his support for Northam but did not attend Northam´s hour-long press conference about the photograph, where he announced he will not resign. In the event Governor Northam does resign, which he has said he will do if he feels he can no longer govern, Fairfax will become Governor.

Fairfax appears to be the perfect band-aid to fix Governor Northam´s mistake, although Bigleaguepolitics.com (a conservative website, incidentally the same website that originally covered Northam´s racist photograph) released a sexual assault allegation against Fairfax from 15 years ago in the form of a Facebook post. So far, Fairfax´s office is denying the allegation.

While Fairfax´s story may currently still be breaking, Governor Northam´s is surely almost over. His inevitable resignation must happen for the commonwealth to move on and create a better reputation. In times like these, we must ask ourselves what our expectations are for our leaders and representatives. In 2019, with all of the political turmoil our country faces, our expectations may not be high but there is still a standard to meet to be an elected official of the people. Governor Northam no longer meets that standard, and it seems he never did.