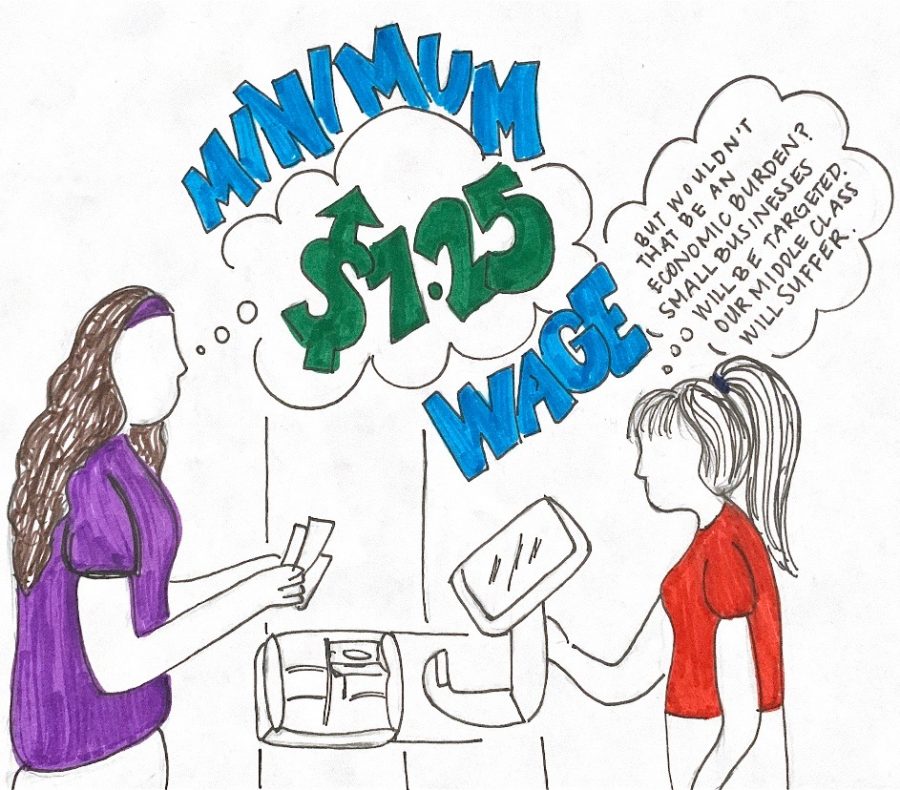 Should the federal minimum wage rate be raised or remain constant?

The current federal minimum wage is $7.25; however, some states and individual cities have raised it for their inhabitants. In states and cities where there are conflicting rates, employees earning minimum wage are entitled to the higher rate. Last summer, the House of Representatives passed the Raise the Wage Act of 2019 that would gradually raise the minimum wage to $15. The bill died in the Senate about a month later, leaving the country scattered with different minimum wages throughout individual cities and states.

The minimum wage-earning community is, in some ways, the foundation and support system of America’s economy, and we are incredibly grateful for the work this community puts in for the betterment of our country.

Point: The minimum wage should not be raised.

Sure, of course everyone wants to be paid more hourly, especially those in the lower class and who have to support others on top of themselves. But it is important to consider the downsides of “leveling the playing field.”

So, why shouldn’t the rate be raised?

With an increased minimum wage, employers—from small business owners to food chain managers—would experience severe economic burdens. In some cases, businesses would experience slow economic growth with decreased profit due to having to pay their employees more. This means that businesses would ultimately begin losing money unless they increase the prices of their products. But if they do that, they wouldn’t be as competitive with other businesses surrounding them due to their increased prices if the other businesses aren’t forced to pay its employees more hourly, due to their location and what laws are in place.

Not only that, but if it costs employers more to hire a single employee, they won’t hire as many if their business can sustain itself with a smaller number of employees to help the business lose less money. This potentially means that while those who do get hired are paid more, there would be fewer employees in general, leaving more individuals out of work. According to ProCon, “The Congressional Budget Office projected that a minimum wage increase from $7.25 to $10.10 would result in a loss of 500,000 jobs.” This is a scary statistic that needs to be taken seriously. So while the individual may benefit with increased hourly wages, the minimum wage-earning community as a whole will suffer.

In the age of technology and innovation in the workplace, companies around the world are constantly trying to find new ways to make their businesses more efficient and profitable. This may sound great, which it is in most cases; however, with a raise in the minimum wage, employers would potentially strive to find other ways to get the desired work done rather than hiring human employees. Global companies have been investing more money into automatic processes that lessen their need for human employees and make the lives of consumers easier, ultimately increasing the satisfaction rates among big companies in a competitive global market. This is seen everywhere, including self-checkout stations at Target and automated help call-lines for customer questions and satisfaction. If employers find themselves in a situation where they could spend less money on technology or more money on hiring employees, the employers will choose the cheaper option to maximize profit. Of course, we would all like to think that managers, CEOs, and presidents of companies will be “good people” and run their businesses with the wellbeing of the working class in mind, but they can only do so much without causing their business to suffer and deterring them from their goals. Profits are the driving motivation for a company, for they are what keep companies afloat, so if more of it can be saved and made, whatever needs to happen in order to see it through will be done.

It’s not rare for companies to outsource labor in order to pay their workers less, however this phenomenon would only increase if employers were forced to pay their native employees more than they would for outsourced labor. So, employers would do what anyone else whose objective is to maximize profit would do: cut costs in labor by hiring inexpensive employees who will work for less. This has been seen throughout history, where big companies hire poor, less skilled individuals who will accept any job that is offered to them to try to make a living for themselves. Fiscally, this is great for employers; unfortunately, this source of “cheap” labor attracts non-Americans, meaning the American people are hurt by outsourcing. Despite being beneficial to larger companies, this trend leads to rises in unemployment levels.

Forbes announced that several Wal-Mart stores have been forced to close due to an increase in local minimum wages, and numerous stores yet to open were forced to be cancelled as well, according to ProCon. Smaller businesses simply cannot handle their own expenses and paying their employees more due to their small profit margins.

In truth, it’s incredibly ironic, because in most cases, those who support an increase in the minimum wage also support limiting monopolies and big businesses, yet if small businesses are forced to close due to decreased profit, then the bigger business will absorb the previous business of small companies forced to shut down..

With an increase in the hourly rates of their employees, companies will lose money if they don’t make a change to the prices of their consumer goods and services. In order to stabilize this problem, companies raise the price of their products, forcing consumers to pay more if they want the same goods. This can cease competition between rivalry companies if one business increases its hourly rate due to being in a city or state where the rate is higher but the other(s) don’t have to thanks to their location in the U.S..

Looking at it in terms of a proportion, raising the minimum wage would not necessarily help the lower class as much as one would expect. In fact, an increase in the prices of consumer goods and services due to higher hourly wages for employees equalizes everything, meaning that despite being paid more, the lower class will still have to pay extra for goods. Now, this may not be too hurtful to the lower class. On the other hand, it is detrimental for the middle and upper classes who don’t earn minimum wage, they will have to pay more than originally for goods. Those with socialist ideals may argue that individuals in the middle and upper class have money to “spare” and that they can pay the newly increased prices of consumer goods, it is fundamentally not fair for the middle class community. While the upper class may not feel the economic stress of an increased minimum wage as much as the middle class, the effects would still be felt.

Every action has its consequences, good and bad, and there’s one thing for sure: This action would have some irreversible consequences on the working class. While it may seem like the “right thing to do,” when looking out for the economic futures of our working class citizens, it would put America’s economy in the wrong direction.

Counterpoint: The minimum wage needs to be raised.

As someone who works as a cashier at a grocery store, minimum wage is something that has become very important to me. I’ve seen it all: the angry customers, the hours being cut, the holiday rush leaving employees exhausted and drained … the list goes on and on. Luckily for me, I actually get paid a little more than the minimum wage, so I cannot begin to imagine what people go through who work in fast food who get paid even less for pain-staking work and have to support a family. The more I learn about all of the implications surrounding the minimum wage, the more I realize how messed up it truly is that it has remained the same this entire decade. It needs to change. I believe that the minimum wage should be raised because of the cost of living, the country’s massive inflation, and the caliber of work required of minimum wage employees.

First, the cost of living in comparison to the minimum wage is completely unreasonable. Let’s do some simple math. The current minimum wage is $7.25, and the number of hours  full-time workers typically work is 40 each week. That means they earn $290 per week, and roughly $1160 per month (assuming there are four weeks in a month). Multiply that number by 12, and a minimum wage work makes, on average, $13,920 per year. According to HowMuch.net, the average cost of living for one person in Virginia Beach is $24,444.32, $10,000 more than what he or she makes in a year. These calculations assume that the minimum wage worker does not have children, and taxes are not factored into this equation. Additionally, any sort of luxuries are thrown out the window; there is simply not enough money for workers to go out to eat, or go shopping for themselves, because they don’t have the money. This dire shortage of funds often leads workers to get a second, or even third job in order to support themselves, which puts a strain on all aspects of their well-being, particularly if they have families. Minimum wage is supposed to mean the minimum amount required in order to live comfortably: Why hasn’t it been raised to fit its intended purpose?

Finally, the work that minimum wage workers do deserves much more than $7.25. Again, I’ve lived through some of the horror stories and seen first hand just how much work goes into these jobs. At my job in particular, our customer service representatives get around $2-$3 more than the minimum wage. This seems like a good thing and an improvement from the low minimum wage; however, after watching all the work they have to do, I can say with certainty it is nowhere near enough. They easily have the most difficult job in the entire store, having to manage all the departments, deal with disgruntled customers, act as the link between the managers and the rest of the employees, do odd jobs around the store that no one else is willing or has the time to do, and so on. Most of these reps work full time and have families. As I watch them week after week, I have no idea how they continue to come in and work their grueling eight-and-a-half-hour shifts for so little pay. Despite the struggles the reps face, that isn’t anywhere near the perils of the fast-food industry. I’ve only heard stories from friends who work there, but I understand that it’s exhausting and a horribly toxic environment to work in; one of my friends at work frequently refers to his time working at a fast-food restaurant as the worst time in his life. These workers go through so much, and most of the time people don’t even realize the amount of work that goes into these jobs; they just order their meal, drop a couple cents in the tip jar thinking somehow they’re a philanthropist, and move on with their day. It simply isn’t enough.

The lack of action in regards to the minimum wage has been appalling, and frankly I am disgusted with the blatant disregard of so many people in this country. Minimum wage workers are the backbone of this nation, doing the jobs no one else in the country is willing to do, and getting paid next to nothing for their pain-staking work. I’m not saying they should be paid ridiculously high amounts, but I do think they should at least receive the minimum wage after inflation. It’s the least we can do.